A poster saying ‘We are against Kaliwa Dam’ is posted on a tree at Queborosa village in Infanta, Quezon. This village consisting mostly of fisherfolks and farmers are now at risk of losing their way of life which depends on the river because of the government’s project to build a dam.

QUEZON, Philippines — Development is coming to Queborosa, a sitio in Infanta where a community of Dumagats lives beside the Kaliwa River as they have for generations.

The isolated village gets water through a series of hoses fed by a spring and power from electric panels.

It also sits on the site of a proposed dam that is meant to be a short-term solution for Metro Manila’s growing demand for water.

The project has been described as a “done deal,” fueling uncertainty over whether their homes—and the homes of other Dumagats in the Sierra Madre of Rizal and Quezon—and their way of life will be swept away by the powerful pull of the capital’s needs.

Metropolitan Waterways and Sewerage System board member Reynaldo Velasco, while still its administrator in March, stressed in numerous interviews that the project will only affect 46 Dumagat families who will be given relocation and compensation.

An executive summary of the project by the Environmental Management Bureau puts at 56 the number of Dumagat households that will be indirectly affected by the project.

The project, EMB also says, “will place around 284 IP households at risk of flooding and other effects of possible dam failure or dam break.”

The problem—Ningning Astoveza, a Dumagat chieftain in Cablao in General Nakar town, says—is that it is unclear who these families are and which village they are from. She tells Philstar.com that the Dumagats have not even seen documents on the project “in a language that we can understand.” Although the Dumagat have their own language, they also speak and understand Filipino.

“It is very confusing. They should let each community know about this dam,” Josefina Guevarra of Baykuran, a community across the river and up the mountain from Queborosa says in Filipino.

“Nothing has been explained to us except that they will build a dam because there is no water in Manila,” Guevarra, who regularly treks to the river to fish, says.

Under the Indigenous Peoples’ Rights Act, development projects on ancestral domain require the free and prior consent of the IP communities that will be affected.

Josefina Guevarra has been living in the village of Baykuran for so long that she cannot remember her age. Despite her age, she can still traverse the mountain ranges surrounding them.

MWSS and the National Commission on Indigenous Peoples is in the process of acquiring that consent through assemblies, consultation meetings and field trips to other areas where dams have been built.

Joel Astoveza, chieftain of Makidata and among those opposed to the dam project, says it is unlikely that consent will be given. Four of six Dumagat community clusters have already signed resolutions indicating they do not consent.

“There were a few who gave their consent for the dam to be built. Six from the Minanga cluster, seven from Lagmak and 33 from Masla,” Infanta-based NGO Tribal Center for Development Foundation noted in its newsletter.

Despite that, an Environmental Impact Statement prepared by MWSS and posted by the Environment Management Bureau says resistance is limited to “a few hard-core oppositionists including some politicians using the issue as their campaign slogan.”

Anthropologist Anthony Oliver-Smith writes in the January 2002 issue of Forced Migration Review that "bad consultation" and other shortcomings in resettlement projects could lead to resistance.

As much as the fear of displacement and the destruction of their ancestral land, the Dumagats complain that not a lot has been done to assuage those fears.

"Resistance may be seen as part of a discourse about rights: those of state and capital to develop versus those of peoples targeted to be moved. Underlying resistance is the perception that the most vulnerable are forced to bear an unfair share of the costs of development - which is seen as a violation of basic human rights," Oliver-Smith also writes.

The Dumagats have gone on marches and held pickets to protest the proposed dam, a risky proposition at a time when opposition to government projects and policy is often seen as opposition to development and to the state itself. Joel Astoveza, chieftain of Makidata, also works as a guide for hikers.

Despite the declared resistance of the four community clusters, residents of Cablao, Queborosa and Baykuran say preparatory work for the dam has already started. Markers have been put up, surveying has been done, and work on an access road has begun.

According to the MWSS, the access road to the dam site is already 35% done.

On the hike along the Kaliwa River to Queberosa, Joel points to an area that he says has already been identified and marked as “ground zero” for the dam.

Project proponents have also been frequent visitors to the communities along the river.

“I was fishing in the river when the Chinese came,” Guevarra says, referring to engineers who have reportedly been visiting the site. The P18.7-billion project will be largely funded by official development assistance from China and has been awarded to China Energy Engineering Corp.

“The ones who went (to Queborosa) had three soldiers with them. I don’t know what they were doing here,” she says.

Residents’ accounts vary on the number of security personnel—some say they were police troopers—visited the area, but Rodrigo Piston,a chieftain from Baykuran, says there were 60 of them and that he made them sign a logbook for his records.

Velasco assured the public in a CNN Philippines interview that MWSS will not take shortcuts in the FPIC process but has also described the project as a “done deal” that cannot be reversed.

Ningning stresses, though, that the Dumagats’ consent is nowhere near a done deal.

“That’s why we have doubts. It’s a mystery why they are already working when FCIP has not been granted yet.”

Catalina Cuerdoneras, a resident of Queborosa, says there has been talk that those who will be relocated will be given P30,000, a house and a hectare of land as compensation.

They have also been promised scholarships for their children, Gloria Buendicho of Baykuran says.

Velasco, in an interview on CNN Philippines, said that affected families will not be relocated far from their original homes and that the new homes will be similar to the houses they are accustomed to.

He added the project will mean jobs for the Dumagats since who could be hired to work on the dam, a promise that Guevarra of Baykuran doubts.

“Of course, they will hire Chinese to work there [and] they won’t hire people from here to work on a project we are opposed to,” she says, adding people hired for the preparatory work are from other areas, like Daraitan in neighboring Rizal.

Joel does not put much stock in the promise that the dam project will benefit his people, saying similar ones were made for the Umiray-Angat Transbasin Project, which is also on Dumagat land and faced similar opposition. 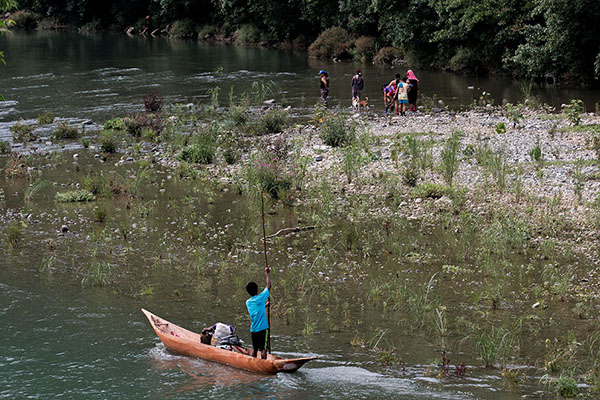 For the Dumagat people, the Agos river also serves a highway for small boats travelling to nearby villages and towns.

A P20-million Cultural Damage Fee over the Sumag River Diversion Project “is still an unfulfilled promise,” the Tribal Center for Development Foundation also notes. Construction for the Sumag River project began even while consultation to get FPIC was ongoing, it also says in its Tinulos newsletter.

Residents are focused more on what they may lose, which is more tangible: Their crops, the fish they catch from the river, the river itself.

Guevarra points at an area across the river from Queborosa and says that is where they bury their dead. She says that it may be flooded or will be otherwise inaccessible when the dam is built.

“We will lose our freedom to move on our own land,” Buendicho says, adding they have grown up and old roaming the forest and along the river where they get their food and livelihood.

“Paano yung aking apo ng apo ng... ka-apo-apohan? (What kind of life will my grandchildren and their grandchildren have?)” Guevarra says in agreement and shared uncertainty.