Fisherfolk in some parts of Bulacan say their livelihood will be affected when a big-ticket aerotropolis project reclaims the waters they fish in and gather seafood from.

BULACAN, Philippines — It was three years ago when Teody Bacon first heard about development plans for Barangay Taliptip, a fishing village in Bulakan town. He was unfazed at the time, certain that the project—like the other proposals he heard before that—would not fly.

But now, uncertainty looms large over the lives of thousands of residents in the seven coastal sitios of Taliptip as a sprawling aerotropolis will soon rise over—and on—the waters they call home.

“What we want to happen is for the sea to be spared. Why do they have to do a land fill when many people here live off the sea? We have always lived here, we have been fishermen all our lives,” Bacon, leader of a local coastal residents’ association in Bulakan, says. Teody Bacon says he can earn from P300 to P500, sometimes even more, in just a few hours of fishing. Relocating somewhere away from the sea is something he and other residents cannot accept.

According to reports in September, the ₱734-billion project will include an 8.4-kilometer toll road linking the new airport to the North Luzon Expressway, bringing the airport within 30 minutes of the financial district of Makati by car.

SMC says the airport and airport city complex project can be a “game changer” and can improve the quality of life in areas north of Metro Manila.

But for fishing communities in Bulakan, the cost of the coming change will be to their lives and livelihood.

The “land development” project will reclaim more than 2,500 hectares of fishing and mangrove areas along the northern coast of Manila Bay.

Around 700 families in Taliptip fear they will be displaced once the construction for the airport city project begins.

Environmental groups warn the effects of the aerotropolis project will be widespread and will affect communities beyond the boundaries of Taliptip.

It is feared the reclamation, as well as paving over natural waterways, will bring intense flooding in the coastal and low-lying areas of Bulacan and in nearby areas and will destroy an environment important to the sustainability of fish production in all of Manila Bay.

Life in Taliptip, locals say, is simple and easy. There is no electricity in the area but the people in the community do not go hungry. They, after all, live with, off and through the sea. Bacon uses a “dragon bubu,” a variation of a traditional fish trap used in Southeast Asia, to catch fish, crabs, and shrimps.

In Sitio Capol, home to more than 100 families, residents tend ponds filled with milkfish and tilapia. There are also salt beds in the village.

Rodel Alvarez, a resident of Sitio Kinse, says he does not need to venture out to fish every day and can earn at least P10,000 a week if the weather and current are favorable.

This, he said, is enough to provide the basic needs of his family and send his two children to school. Rodel Alvarez paddles a small boat across the narrow part of the Manila bay, where there used to be fishponds.

A 2017 fisheries resources and ecological assessment of Manila Bay found that fish eggs and crustacean larvae were abundant in the eastern portions of Manila Bay, particularly along Bulacan, Metro Manila and Cavite from 2012 to 2015.

Raymund Fantonalgo, a marine scientist, says the area where the aerotropolis will be built is a productive nursery and feeding ground because of the rich mangrove ecosystem in the area.

The coastal village is also home to at least three species of mangroves.

According to environmental group Oceana Philippines, mangrove areas are important not only because they provide breeding grounds for marine species but they also help protect the coast from waves and cyclones. “From 54,000 hectares at the turn of the century, only 680 hectares remained in 2016. This figure indicates nearly 99% decimation of mangrove forest in Manila Bay,” Oceana Philippines, which is campaigning against landfill reclamation in Manila Bay, says in an information sheet.

Once the project begins, it will not only displace the people who consider the sea as their lifeblood but also the marine animals that feed them.

“Once the fish are displaced, they will migrate to a new place. Of course, if you migrate and you are not used to the new environmental conditions, you will die,” Fantonalgo tells Philstar.com. 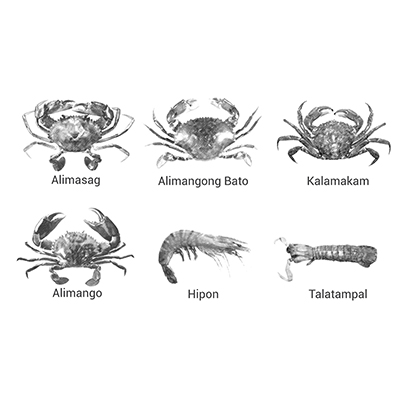 Environmental groups slammed SMC and Silvertides for saying the proposed aerotropolis is not a reclamation project.

“They kept on saying that it’s only a land development project that will not affect the coastal areas, marine bodies and mangrove forests. This is a full blanket denial,” Leon Dulce, national coordinator of group Kalikasan-People’s Network for the Environment, says.

“The areas that were scoped in preparation for development activities are coastal villages like Taliptip,” he adds.

Once the waters of Taliptip are filled over for the new airport, the environment where fishermen thrive will be degraded—affecting the biodiversity and food production in the area.

In April 2018, more than 600 mangroves were cut down in Taliptip. Residents and scientists believe that more than a thousand trees have been trimmed since then. “More than that, let’s not forget about the communities they support. That is what is most important.”

Food security within and beyond Taliptip 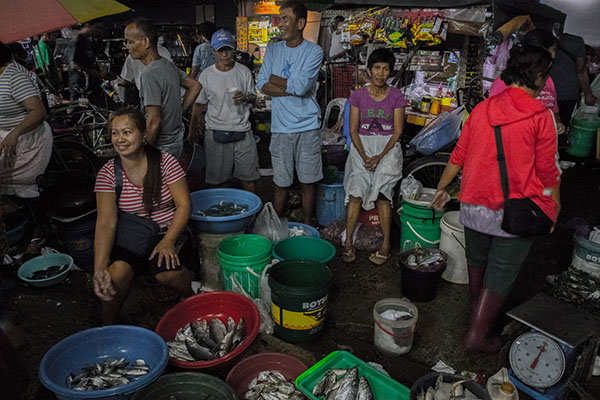 From 11 p.m. to 6 a.m., fishermen sell their catch at the nearby market, where residents and small businesses can buy in bulk.

According to data from the Philippine Statistics Authority, Bulacan generated 956.40 metric tons of municipal fish catch in 2018, thanks to its coastal areas in Bulakan, Hagonoy, Paombong, Malolos City and Obando.

Fantonalgo estimates that Bulakan—where Taliptip is located—contributes at least a fifth of the municipal fishery bounty of the entire province.

Bulacan is also a productive aquaculture ground. Last year, the province generated 39,859.32 metric tons of aquaculture catch, contributing 16% to the production of all of Central Luzon.

Fisherfolk of Taliptip—an artisanal fishing community—supply fish and crustaceans to areas beyond Bulacan, with some of their catch going also to Metro Manila and Rizal.

“Those living in Metro Manila practically benefit from almost one fourth of fish caught here,” Alvarez says, adding there are fisherfolk from Cavite and Bataan who also make a living from the waters of Bulakan town.

The aerotropolis project, scientists say, will definitely have an impact on the food security and sufficiency of even distant communities due to the expected decrease in the municipal fisheries production. Small fishing enterprises sell their catch to the highest bidder

“Bulacan is crucial to the fish [production] of the entire Manila Bay. It means Cavite and Pampanga also rely on the province. That’s the area that will be killed [by the project],” Hernandez says.

But the ones who will be most affected by the airport project in terms of municipal fish catch are those who cannot afford to go deep sea fishing.

“The fish that we get from the market comes from the small-scale fishermen. You see, the large fishing companies, they can go out and catch fish in deep water. That’s what we export,” Hernandez says in Filipino.

Residents of Taliptip have acknowledged that they may have to leave the waters they value so much. But they are not giving up without putting up a fight.

The villagers, mostly from Sitio Kinse, have attended paralegal training workshops conducted by Oceana Philippines to know their rights. They have also held pickets to protest the project.

In the latest picket dialogue held in September, the residents were told by the Environmental Management Bureau Central Luzon that the ECC earlier issued only covers land development, not the entire airport infrastructure.

SMC President and COO Ramon Ang claims most of those will be displaced by the project are fishpond workers, not fishermen like Alvarez and Bacon.

He adds the residents will be given not just money to build new houses but also a new source of income.

“When we relocate people, we will give them land and money to build their homes. We also give them livelihoods and we will help them in sending their children to school. We will give them bright future. We will not just relocate them in mountains or somewhere,” Ang said during the signing of the concession agreement for the construction of the airport in September. Residents of Sitio Dapdap, a small fishing community of around 30 families, will be displaced by the project and are waiting for assurance of proper relocation once work on the aerotropolis starts.

But the residents interviewed by Philstar.com lament that the company has yet to provide them with the masterplan of the project.

Coastal villagers were also told they will be contracted to help build the airport—the project that will take away their livelihood.

While construction work may provide temporary jobs to people, it is an unsustainable solution for people who have been depending on the sea all their lives.

“Once we are relocated, we will rent houses, pay electricity bills, then be given a job where the wage is set. Here, you don’t have an employer. If you’re not feeling well, you are allowed not to fish. But if you work in construction or factory and you’re sick for a week, you will be easily replaced,” Bacon says.